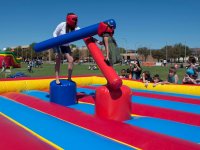 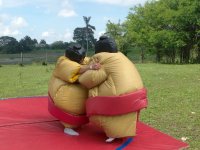 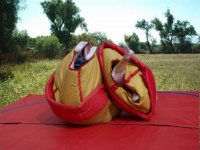 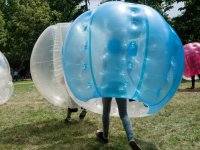 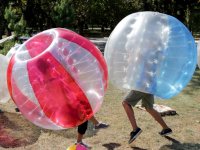 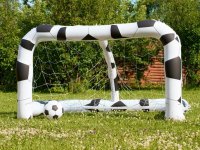 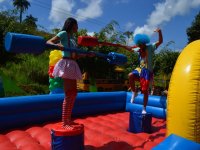 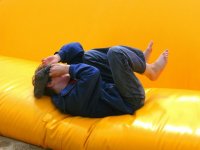 In Ávilamultiaventura, we propose a gymkhana of hilarious tests so you can not stop laughing for two hours. Our monitors will explain the different tests (some traditional and others more innovative) that you will have to do and will be with you to solve any problem you may have. The tests of our gymkhana for bachelor and bachelorette parties in Ávila are as follows:

- Fight of sumos: all the participants of each team will dress in a funny sumo costume, and you will fight in turns against a member of the other team, on a tatami on our arena. The team that gets the most battles will win.

- Gladiator fight: a fun game in which each team will have to choose a representative who will fight against the representative of the other team. The two fighters will climb on padded platforms, and their objective will be to knock down the opponent of that platform using giant foam canes. The game is repeated so that everyone participates in it, winning the team that has more times knocked down the opponent.

- Demolishing ball: two members of a team will fight against two others of the opposing team for being the last to remain on the platform !.

- Relay race: crazy and fun relay race with three hilarious tests; in the first, you will be provided with giant gloves and your objective will be to take some small balls of a certain color, which are in a cube together with many other balls of different colors and dunk them in another cube located at a certain distance from the first one. In the second one, you will not take off your gloves, because you will have to fill a jug of water with small glasses. Finally, you will have to throw balls to a curious target. The team that scores better (including time) wins the game.

- Who am I?: A player from each team will put on a helmet that will have a card stuck with a famous character (real or fiction). The other players on your team should give you clues to guess who it is, in a maximum of 10 attempts (answers). The game is repeated four times by each team and will win the team that most characters have guessed.

- The craziest penalty in the world: with this test, you will start laughing. All the players of the two teams will have to give ten laps with the right hand on a traffic cone, and then throw a penalty to one of our small goalies in our arena. There will be the most absurd falls you can imagine, which will make this game a non-stop laugh. The team that will score the most penalties will win.

- Team trivia: the questions will be asked in which a player from each team with a special suit will participate. Giant cards will be placed on the ground of which the only one will have the correct answer to the question asked. The player who first jumps on it wins the game. The player who loses from each game will receive a "gift" from the opposing team. Win the team that wins the most games.