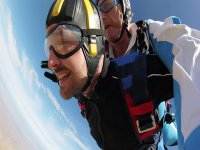 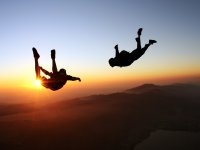 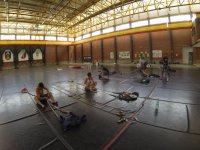 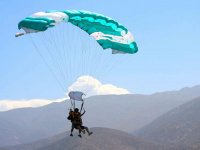 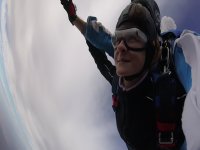 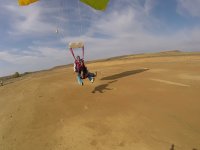 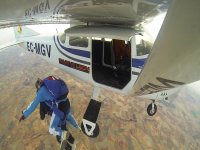 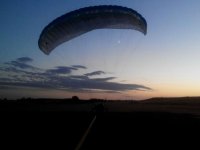 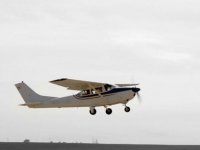 Are you a lover of extreme sports and heights?

If the answer is affirmative, with Skydive León you will be able to enjoy the best adventure of your life. With us you can experience the intense emotion that a parachute jump provides. A unique sensation that cannot be explained in words.

Skydive León is a young company but made up of great professionals in the skydiving sector. We will leave with our plane to the ideal place where to make the jump, at 3,000 meters high, which you will do with one of our instructors who are great experts in this aerial discipline.

Before making the jump we will give you a basic instruction so that you can face the challenge with total security and tranquility. Immediately afterwards you will experience a free fall of 30-35 seconds that will make you experience the strongest emotion you have ever experienced.

When you are at about 1,500 meters of altitude, the instructor will open the parachute and you will be able to enjoy approximately 10 minutes of calm flight that will help you calm the rhythm of your heart and contemplate the most beautiful landscapes of León from the heights.

In order to make the jump, the following requirements will be essential:


If you want to enjoy life to the fullest, come visit us and make your dreams come true. Check our availability and don't miss out.

It has been a wonderful experience, full of sensations that have made me vibrate. I still have a hard time believing that I did it! All the workers of the skydiving center have been very kind and they have made me feel very good, they are good professionals!

Feedback useful for 17 people Did you find this helpful? Yes

It is a pass, I recommend it to everyone, the level of adrenaline ... maximum. The staff is wonderful, everyone in general, very attentive, friendly, you feel so wrapped up that your nerves are forgotten. A big hug to all the staff. Thank you!

Feedback useful for 10 people Did you find this helpful? Yes

It is a unique and unforgettable experience, adrenaline rush, with good company, kind and super attentive tutors, when you live something like this it is better to do it with good professionals, here you have them and that is worth a lot.

Feedback useful for 10 people Did you find this helpful? Yes

You have to go very heavy from home because with the bank of them you trust 0 and that means you can get annoyed 50 € reserve and not jump to the minimum.

The plane is old and the jump is not made from high altitude.

Company's response:
Jesus your message is completely false and written by a person with anger ... But we will answer to clarify what happened: - Your contrast through Yumping * (* Yumping is a mediator, it is like an "agency of activities" which has its own terms and conditions when it comes to returns and others ... and nothing has to do with those of the own Parachuting Center). - When hiring for Yumping, you must pay for the entire activity, in your case you contracted two activities (one for you and one for your brother). - The reservation was managed once we received the notice of Yumping. - The day of the jump you were and your brother did not meet the weight requirements (which are stipulated on our website and also in the Yumping). * If you did not read them (something you told us that happened, that you had not read them) that is a problem of yours, neither of the Parachute Center nor of Yumping. - You were told what that caused, which is that your brother, for security reasons, could not carry out the activity and the money for the activity was lost. - What happens? That Yumping charges you the totality and you lost the 260 € corresponding to your brother. And we told you that if you had processed the booking directly with us, you would have only "lost" € 50, which is what we asked for. - In an act of good faith on our part, we mediated with Yumping (something that we do not have to do because you have contracted with them directly and you are with them who must fix your disagreements) we got to "return" the rest. - You accepted it and thanked it at the office in our office, because you saw that we lost time and delayed the flight to manage your problem. - Now, after jumping and be happy with the activity and management. After Yumping actually charged you € 50, you complain putting a bad score to the Skydiving Center (when the rift is with Yumping ...). We will also clarify the points that in the review indicate: - The scale is calibrated, but to see how you show us that you do not. But do not affirm without knowing, you are fatal. By the way, your brother did not spend in 1kg or 2kg ... he spent a lot more! - "The plane is old" ... how daring is ignorance. And it is clear that you show a lot about aviation, but we are not going to explain here about the maintenance / antiquity of the aircraft. - The height is neither more nor less than the one advertised, 3,000 meters above the ground (3,800 meters above sea level). That you have been short because you enjoyed it (as you said when going down) that is something that makes us happy, but then there is little ... What has been said, a comment from a person with anger that neither assesses the good faith efforts that were made by him, nor really reviews what the activity enjoyed. In addition to that is wrong in who should assess negatively. Greetings, Signed The management of SKYDIVE LEÓN Skydiving Center

Feedback useful for 4 people Did you find this helpful? Yes

WOULD REPEAT!
David Suarez 10 Very good
Reviewed the 05/08/18
about the activity of: Tandem parachute jump photos and internal video León

Great treatment and professionalism of the team and the people who are part SkydiveLeon ... to repeat without hesitation. Let's see if we can convince a friend.

An initial course is available with all the instructions that must be followed. The monitors are very friendly and provide confidence. Worth.

Very good experience, very friendly and very attentive, of majos who were looked like Asturians.

An incredible and unforgettable experience, at a good price and with a fabulous treatment by the staff. Other jumping options would be missing, at higher altitude in my case, but being the only center in northwestern Spain does not fall short.

Very friendly and professional. The monitor of 10! 100% recommendable. Would go back to the experience again! Thank you very much.

WOULD REPEAT!
Yirka 10 Very good
Reviewed the 25/07/20
about the activity of: Tandem parachute jump photos and internal video León

Brutal. You just want to repeat. It gets too short!

Be the first to comment! Did you find this helpful? Yes
See all reviews