Activities related to your search 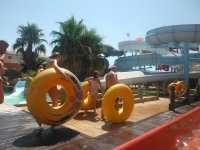 All the Amusement Parks companies in Madrid

Cortylandia Arroyosur is a leisure center designed to enjoy a family day because it has several attractions so you can spend a unique day without having to travel very far because it is very close to Madrid, specifically in the Arroyosur de Leganés Shopping Center. Some of the attractions you can find in the park: Maze of games where you will find zip lines, slides ... Airplanes, you will feel like you fly over the other attractions of the center. Tractor circuit, you can drive a tractor while walking through the farm we have. Race track, you can enjoy a race with a real Formula 1 driver. Flying horses Noria Tic-Tac There are also mini attractions so that the little ones can also have a great time or enjoy some delicious goodies from our kiosk while walking through cortylandia. It will be a fun day with your family without having to go far. (Amusement Park Madrid)

The history of the Madrid Amusement Park began in 1969 being inaugurated by Francisco Franco. Attractions like "the slide", "bumper cars", "the mirror maze", "7 Peaks", "Enterprise", "The Pirates", "The Valley of Prehistory" or "The Octopus" became very known. The park has undergone several renovations in which they have been closed, opened, and replaced attractions. In 1990 an important investment was made in which the new northwest area was opened that housed the attractions "El Cóndor", "Aladino", "Flume-Ride" (Being the first attraction where visitors get wet), "The flying chairs "and later" Las minimotos ". In 1998 it had the most important remodeling, when the rise of theme parks around the world forced the owners to make an investment of 8,000 million pesetas (48 million Euros) to remodel the park and turn it into a theme park . Currently the Madrid Amusement Park offers a wide variety of activities and services of all kinds, among the many attractions that you can enjoy some of these:      Abyss: The most spectacular last generation roller coaster, unique in the world of its kind. The most daring visitors will have the opportunity to generate a large amount of adrenaline when they rush into the abyss from the highest point, 49 meters high at a speed of 100 km / h and experience its impressive route, which by drawing in the air different figures: ringlets, investments, hills, immelmans, etc.      Pirate Ship: Large futuristic ship of 20 m long where you will experience the fun sensation that an oscillatory movement produces in your body, which elevates you again and again, ten meters high, like a large pendulum that comes and goes .      Red Baron: Start your plane's engines, give it gas and take off. In heaven you are an ace of aviation. Enjoy this carousel of colorful planes that go up and down nonstop as you guide.      Horses of the West: The Indians are on a war footing and the sheriff needs your help. Ride fast and through the town and warn the gold diggers of the arrival of the Indians. Welcome to the Horses of the West. From 3 years.      Cinema 4-D: Discover the fourth dimension From the moment you sit in the armchair you will feel its effects in the first person but you must be very attentive, you will discover the fourth dimension. Enjoy it with your family.      The Sawmill: Water roller coaster with canoes that run through a canal with two great and refreshing falls. A photo will be taken during the tour.      The Queen of Africa: InIt is actually a ghost ship that simulates those who navigated the Mississippi. If you embark, you will find endless traps inside that will try to prevent you from seeing the light of day again. Will you get away?      Shuttle: The best way to experience safe "bungee jumping" without leaving Madrid. This facility, brought from the US, grants the privilege of feeling a free fall at 80 km / h from 63 meters high. The intense sensation lasts only 2 seconds: enough to alert the entire nervous system.      Los Fiordos: Great and refreshing water roller coaster with a great fall of 56 km / h. Although it is the last in the area (geographically speaking) it is one of the most fun in the entire Park. Our operators will ride you on a barge that will climb a large mountain 56 meters high      The Rapids: The most fun way to go rafting. Great tour in inflatable boats on the simulation of the rapids of a river. If what you really like is adventure sports, in this facility you can practice rafting without leaving the capital.      Top Spin: One of the favorite attractions for its loopings and its crazy movements of translation and rotation on its own axis. You will quickly find it by the screams and applause of visitors when the platform slowly lowers them towards the ground. One pass!      Tornado: Reaching a speed of 80 km / h, its 800 meters of travel run between the treetops and its independent trains make all visitors shout, from the first seat to the last. Definitely. An attraction for all ages, because adventurous spirits have no limit.      Vertigo: Family roller coaster consisting of a unique and surprising journey where the visitor begins the journey at a height of 15 m and glides at full speed in a car on a 400m route. full of vertiginous curves and spectacular changes of grade. It has a capacity of a maximum of 10 cars of 4 people, which ensures that at the time, about 900 people can enjoy it. Do not hesitate and come to enjoy the Amusement Park of Madrid, one of the most emblematic amusement parks in our country. A place where you can enjoy with the whole family, not only the best attractions but also a complete catalog of services, restaurants andstores. (Amusement Park Madrid)

In the Parque Warner Madrid you will find a world of illusion in which to lose yourself among attractions, shows and different themes that will trick you. You will spend a day full of excitement and fun trying from the most extreme attractions to the softest and most relaxed. So, for example, you can climb the roller coaster Stunt Fall and feel the greatest speed, height and impossible curves on your body. You can try something more moderate like discovering the secrets of the Haunted Hotel or enjoy with the children of our flying chairs . These are just three small strokes of what you will find in the park, to discover them all you just have to visit us. But, in addition, in the Warner Park in Madrid , you will have the opportunity to enjoy a multitude of beautiful and impressive shows . You can fully enter the world of Batman , see the best dances in the show Hollywood Dancers or enjoy our crazy police academy . We also have very fun workshops for the little ones such as the Indian workshop where they will learn how this ancient culture lived. You can choose between dry and aquatic attractions , enter our audiovisual experiences and contemplate the different scenery of the park that will transfer both to fantasy worlds and to the most exotic cultures. And to regain strength of such action you will find a wide range of bars and restaurants as well as picnic area to eat what you have brought from home. (Roller Coaster Park Madrid)

The best areas to do Amusement Parks in Madrid